On September 7, led by the China Science and Technology Exchange Center, more than 60 experts and scholars from the National Research University Higher School of Economics of Russia, the China Institute of Science and Technology Evaluation, Stellenbosch University in South Africa, and the China Science Center of International Eurasian Academy of Sciences and other think tanks and universities at home and abroad jointly compiled the fourth BRICS Comprehensive Innovation Competitiveness Development Report (2020 English version, hereinafter referred to as the “Report”), which was released at the “2021 BRICS Forum on Partnership on New Industrial Revolution”. 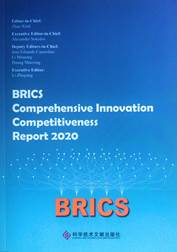 (Yi Degang made a videoconferencing introduction)

It is learnt that this Repot was published with the funding of the China Council for BRICS Think-tank Cooperation (CCBTC), and was funded by the National Social Science Foundation of China, the second-level professional technical funding of the Ministry of Science and Technology, and the GBA Silk Road Science and Technology Innovation Research Think Tank in research. Academician Valery Bondur, deputy dean of the Russian Academy of Sciences and dean of the International Eurasian Academy of Sciences, served as consultant to the editorial board of this Report, and Luan Jianzhang, then secretary-general of CCBTC, was the director of the editorial board.