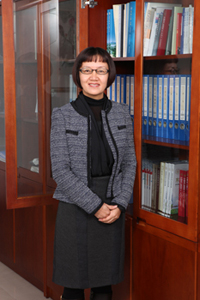 Liu Shuhui was born as a member of Han ethnic group in Xinzhou of Shanxi Province in December 1973. As an Associate Professor and Master of Management with on-job postgraduate diploma, Liu now serves as Deputy Vice-Chancellor of the Party Committee of Donghua University and a delegate of the tenth Party Congress of Shanghai.

Since then, she has successively served as Vice Party Secretary of the College Party Branch, Vice Director and Director of the Student Affairs Office as well as Head of the Organization Department. In November 2012, Liu was appointed as Deputy Vice-Chancellor of the Party Committee of Donghua University.

Liu has devoted herself to the ideological and political education, and the construction of fundamental party organizations in universities. She has published academic papers in many journals, such as the Textile Education, Journal of Donghua University, Ideological & Theoretical Education and Shanghai Education. Liu has also compiled and co-authored many books, such as Facing Employment and Stepping into Universities.