Juliette MacDonald is the International Dean of SCF, and Director of the Cooperation Project of Edinburgh College of Art & SCF. As the founder of the educational cooperation between DHU and the University of Edinburgh (UoE), she has introduced  advanced international teaching concepts and resources into Shanghai,  deepened the understanding and mutual trust of educational policies and  ideas between China and the UK, improved the effect ofdialogues by means of exchange andstudy, and provided an example for the diversified development of the higher education in China and the UK. With her push, the cooperative education program of DHU and UoE won the “2020 Innovation in Education of China-Scotland Business Awards”.

She has actively payed attention to and organized public welfare activities, undertaken important social responsibilities, pushedforward the initial formation of “the theoretical system framework of fashion and innovation”, and promoted the sustainable development theory, and teaching system, talent training and discipline construction in Shanghai universities. She has responded positively to China’s “One Belt One Road” Initiative, promotedUoE to join the “B&R World Textile Universities Alliance”initiated by DHU, and made great contributions to the international exchange and cooperation in textile education of Shanghai.

She advocates and disseminates ecological and sustainable fashion with  international standards, promotes the interdisciplinary and integrated  development of textile, fashion, materials and other disciplines, and  actively promotes the development of cultural and creative industries in  Shanghai. The achievement of the interdisciplinary cultural and educational integration project that she participated in—Scientific Cheongsam, has been shownin Edinburgh Art Festival for four consecutive years, and was selected into China’s National Exhibition “40th Anniversary Exhibition of Reform and Opening Up”and “Achievement Exhibition of the 70th Anniversary of National Day”. 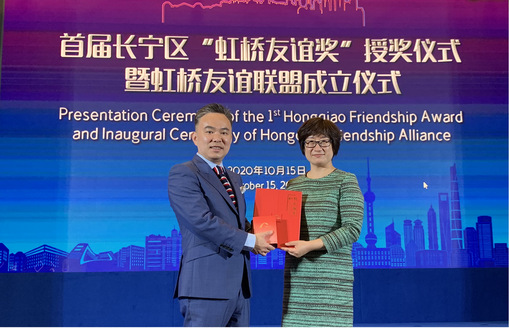 (Zhao and Li received the award on Juliet McDonald’s behalf )

Given the epidemic, Juliette McDonald entrusted Zhao Mingwei, Director of International Cooperation Office of DHU and Li Jun, Dean of SCF to receive the award on her behalf. She sincerely thanked the Office of Foreign Affairs of Changning District for their affirmation of her work, and stated that she would continue to work with SCF to actively promote the cooperation and research of the higher education in China and the UK, and make contributions to the foreign exchange of Changning District.

In the future, DHU will further deepen the exchange and cooperation with UoE, and promoteinternational collaborative development of sustainable fashion, training of interdisciplinary talents of fashion and creativity in Shanghai, and international exchange and cooperation of Shanghai fashion industry, to create a beautiful new life of fashion together!