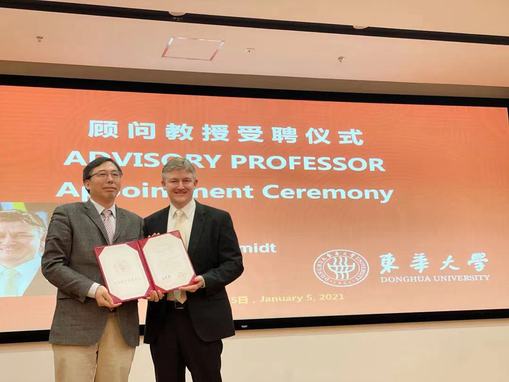 (Presentation of the letter of appointment)

After the ceremony, Professor Michael Schmidt gave an academic report entitled “Relevance of material science for fundamental R&D and future applications”. In the meantime, Professor Michael Schmidt introduced the ‘In China, for the world’ innovation strategy implemented by Covestro and their vision of benefiting society, improving the quality of life, and reducing environmental impact through composite materials and innovative technologies.

Dr. Michael Schmidt is currently the vice president of Innovation, Covestro Asia Pacific, dean of the Covestro-Tongji Innovation Academy, and a member of the Scientific Advisory Committee of the Textile Technology Society of RWTH Aachen University. He has been engaged in the research of polycarbonate materials for decades. In the research field of polycarbonate materials, he has gained one authorized patent and published more than 30 papers in internationally refereed journals. He was honored as the “best scientist” by the German Rheological Society in 2001; in 2007, he won the European Plastics Innovation Award in the category of “best lightweight innovation”.